SAFETY. The primary concern of Montgomery Place residents is safety. City staff from the Transportation Division heard that message repeatedly at the second Local Area Planning (LAP) meeting held on June 10, 2015 in the auditorium of St. Dominic School.

A neighbourhood traffic review began in August 2013. This summer and fall, traffic count data will be collected. A draft traffic plan will be prepared and presented to residents for comment. The plan will be finalized for presentation to City Council at some future date.

After presentations from City staff, the 45 or so residents attending the meeting split into five groups for discussion about traffic concerns in Montgomery Place and the 11th Street corridor.

“Can’t do it,” replied City officials. “It would be too costly to fund the studies required. New signs would have to be made and installed if the speed limit was lowered to 40 km. If we do it, we would have to do it for all neighbourhoods, not just Montgomery Place,” they said.

“We’ve done the research. We’ve surveyed the community,” replied the residents. “Would new signs be more costly than sidewalks throughout the community?” asked another. “Montgomery Place is not the same as any other Saskatoon neighbourhood. We have no sidewalks. Pedestrians, cyclists and drivers share the road,” many people were quick to comment. “The speed reduction can easily apply to our neighbourhood only. We have surface drainage, so on some roads the ditches are deep. Our roads are narrow, with no sidewalks. We are different,” Montgomery Place residents claimed.

Other concerns from residents included the need for more stop and yield signs and other traffic-calming strategies, residents cordoning their front property line, poor sightlines at some intersections, cars parked on the street that narrow the roadway, back alley cruising, the state of the streets (although it was noted that potholes may slow traffic as well as speed bumps would), congestion in school zones before and after school, and the speed of city buses.

Concerns about 11th Street focussed on heavy truck traffic, poor signage, unsafe intersections, poor sightlines and visibility, noise and dust pollution, and the ever-increasing traffic. Ironically, every concern put forward by the residents at the meeting had been transmitted to the City a year earlier when David LeBoutiller, an engineer in the City Transportation and Utilities Department, joined the Montgomery Place Community Association (MPCA) meeting in June 2014.

The most obvious solution to 11th Street Corridor problems would have been not to mix industrial areas with residential neighbourhoods in the first place. But it’s far too late for that solution. Proof in point – the recent re-zoning to Light Industrial of the parcel north of 11th Street between Crerar Avenue and Crescent Boulevard. The land west of Chappell Drive seems slated for light industry as well, so Montgomery Place will truly be a neighbourhood systematically isolated by industry. Industry brings noise and air pollution, along with heavy truck traffic that increases with every additional industry that establishes nearby.

The West Connector Route Study to link Highway 16 to Circle Drive South via Valley Road is underway. Some Montgomery residents wondered how Cedar Villa residents feel about this likelihood.

Trains – the inevitable Montgomery Place bugbear – were discussed. More than a few examples of hour-long waits at the intersection of 11th Street and Dundonald Avenue are on record recently. Trains are much longer, louder and more frequent than ever before. The completion of Circle Drive South provided the perfect opportunity to rid Montgomery Place of a complaint that residents have brought forward since 1946. But no, the level crossing remained, and adding insult to injury, an additional rail line across 11th Street was built. Residents at the meeting expressed concern about the future move of shunting to the 11th Street lines. Inevitably it will mean worse things ahead – not only long traffic delays, but also the possibility of hazardous goods passing dangerously close to our neighbourhood.  There was also mention of a possible re-instatement of the Dundonald at-grade crossing.

At the End of Two Hours

The meeting concluded with appreciation for the interest and passion shown by Montgomery  Place residents and an outline of LAP activities that would resume after the summer break.  Additional comments can be submitted to the City by mail or email by July 10, 2015. 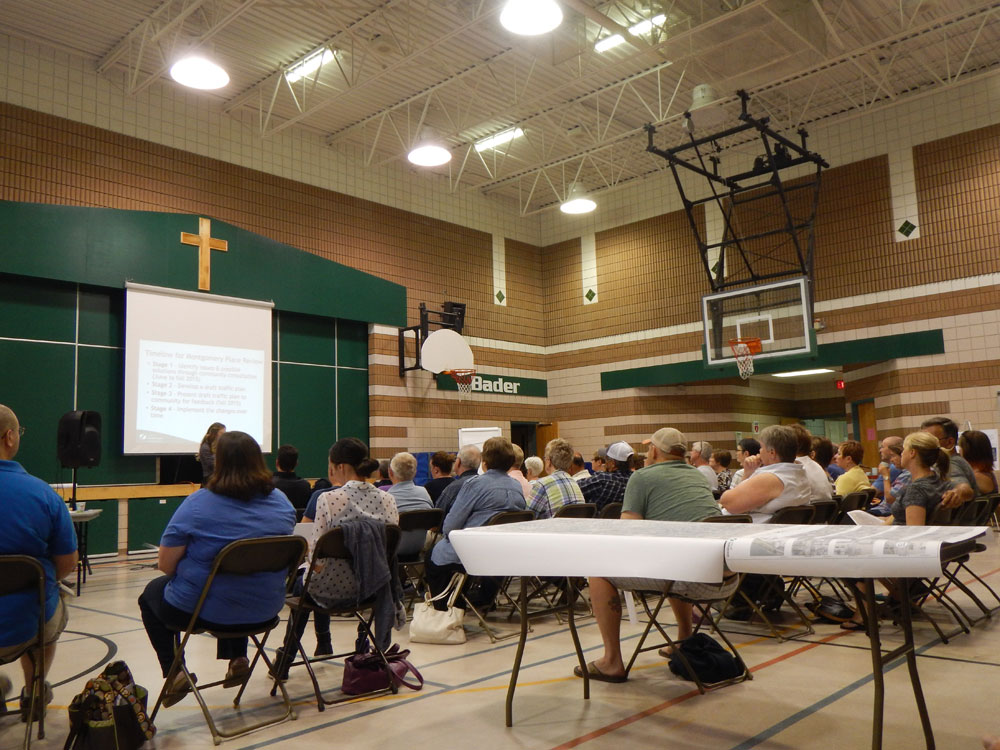